In the Celtic traditions of seasonal changes, there is a belief that the summer and winter faces of Brigit, are divided during the year. Since the Goddess holds the Sovereignty, or the authority of the land, historically her comings and goings have been important to those who follow her movements.

Imbolc, The Festival of Brigit, is at the beginning of February and that is when the summer face of Brigit can begin to emerge. There is even a snake involved in this story and it comes out of the hole in the ground like the groundhog we are used to hearing about. If there is going to be a challenge and a struggle between the summer and winter forces of the goddess, Brigit and her winter Cailleach aspect, then it occurs during the six weeks between Imbolc and Equinox: this struggle can result in storms when the cailleach “has her way.”

In Scotland the day when everything is resolved is not the 21 but the 25 March, and I think that without splitting hairs we can say that the great grandmother of the landscape, the Cailleach, prevailed this year. I called an Imbolc feast together and had to ask people not to gather in person because there was not only questionable weather for travelling but enough snow to severely limit parking around the house. Those of us drawn to Brigit’s light all lit our candles at home: nonetheless, the storms had only really begun. 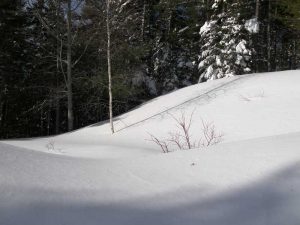 After the March 19 storm

Now that we are on the other side of several of them, the most challenging in what some say is 50 years, we have to look at climate change as serious. It is not that we are going back to the old winters that we had as children, but they are going to get more extreme.

Meanwhile we do not live as we did in the past when storms were fierce, but have built an expectation of convenience and an infrastructure that depends on so many factors running smoothly and “as they have” for the last 50 years, that we are as human culture, and foremost in the West, now out on a limb. We have lived on the basis of cheap oil and gas, electricity in every home, with even greater dependence on commuting to work, importing most of our food, treating anywhere in the world like it is next door. I think that the Cailleach with her eons of existence,” older than the eagle, older than the salmon, older then the yew”, is having her say. She is asking us to look at where we got the idea that our lives would all remain in the unsustainable comfort zone of the last half century, with us feeling that we are in control of the earth instead of partnering with her.

Sitting in The Hag’s Chair at Loughcrew, Ireland, 2012. Click to read story of that trip.

The famous “Old Woman’s Lament from Beare” is from the 9th century, when elder women started to lose their influence in Gaelic society to such a degree that this poem could written for an audience that would understand what it meant; the king no longer conferred with the cailleach and the legend that the landscape emerged out of the hag’s apron, morphed into a battle between her and St. Patrick, which she lost, of course. This understanding was given to me near the Hag’s Chair at Loughcrew by our guide who had grown up with the legends and the land he knows and loves intimately. He showed his wry sense of humour by saying, “Of course St. Patrick was everywhere and in all times ” thereby explaining how Patrick could have defeated the-time-before-time goddess of the land.

This is not a put-down of the saint, a man remarkable for his time, but reveals the underlying process of our gradual disconnection from the wisdom of the old women, until they were just looked on as old biddies or old hens, as a way to disregard their midwifery, medicines, and their experience of life.

Volume 4 of a series

It took many centuries for this to happen, and in a place like Ireland, the storytelling and keening at funerals in the home have only been replaced over the last 50 years by television entertainment and funeral homes, where the traditional form of lament, so spontaneous and primal, has been discouraged. Vanishing Ireland, a multi-book project by James Fennell and Turtle Bunbury who are writing and photographing for the same reason as the Cailleach’s poem was published: it comes from noticing that something is passing away that has been very valuable and precious to the soul of human existence. The faces of the old people who are in the “Vanishing Ireland” books tell the story of those who kept those precious weavings of belief and practice until very recently and it was people like themselves that mended the holes in the fabric of Irish society with community sharing of song, stories, dance and lives lived close to the living earth.

The people that stayed in small communities scattered about the world held knowledge that we thought we might not need again, so we have enticed young men to the cities and boom towns of the north, mines and pipelines and whatever would break up families and communities, whether in Botswana or Turkey or Canada. The old women have been left to look after children or to spend time in nursing homes, their experience and wisdom unused.

As I am now at the age of the grandmother, and have been open to what this winter has brought to me, I think of the cailleach as a weather maker, her endeavour being to awaken us to the reality of changing climate patterns and life on the planet as a result. We have put off modification of our behavior too long to avoid the impact that is going to come as a result of the climatic changes. We have stressed ourselves nearly out of sane existence with all the striving we are mindlessly doing because our secular culture insists on it for recognition, and even bare sustenance. We have the opportunity now to surrender in this moment to something else, that must emerge and be birthed if we are to survive with whole bodies and souls.

Surrender is not a popular concept in the world where we are known by what we do, not by our character or what we are inside. Surrender seems wimpy and victimizing, when it could actually be giving space to something new; the old method of controlling has to die along with all the many other ways that are not appropriate for our long term well being or the well-being of the planet. The life of the spirit and the soul is being called back by the cailleach: she says slow down, enjoy one another, make art, make music, dance; share stories, notice the world around you and make love with it! Be aware of how everything interacts so that you can embrace the long-term seven generation view, instead of instant gratification.

Winter in its wisdom has given us some time out. Can we accept the gift?